Get your tissues ready. Christmas has arrived in Winchester…among other things. 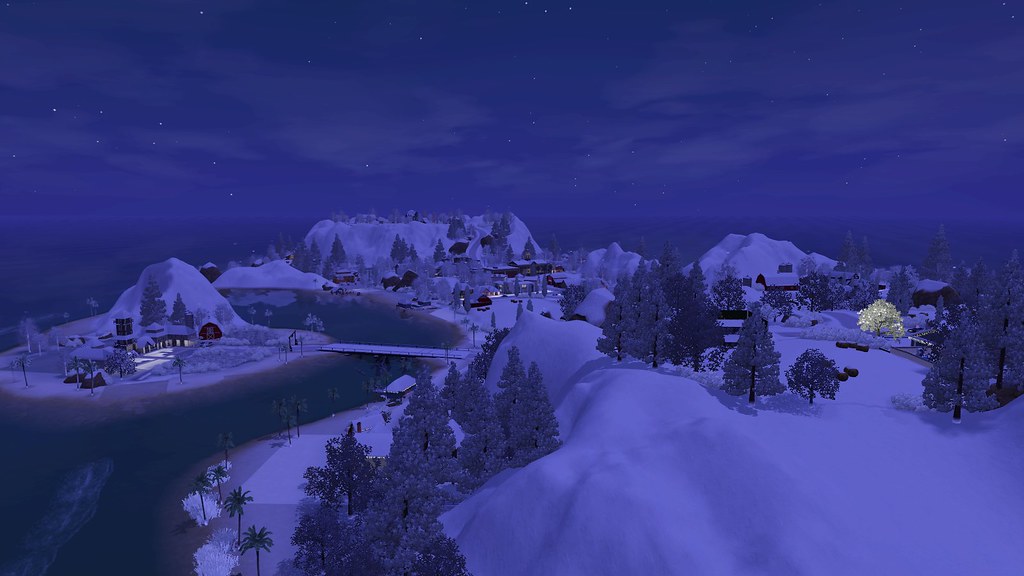 Christmas Day arrived in Winchester with little fanfare.  It did, however, bring lots of snow. 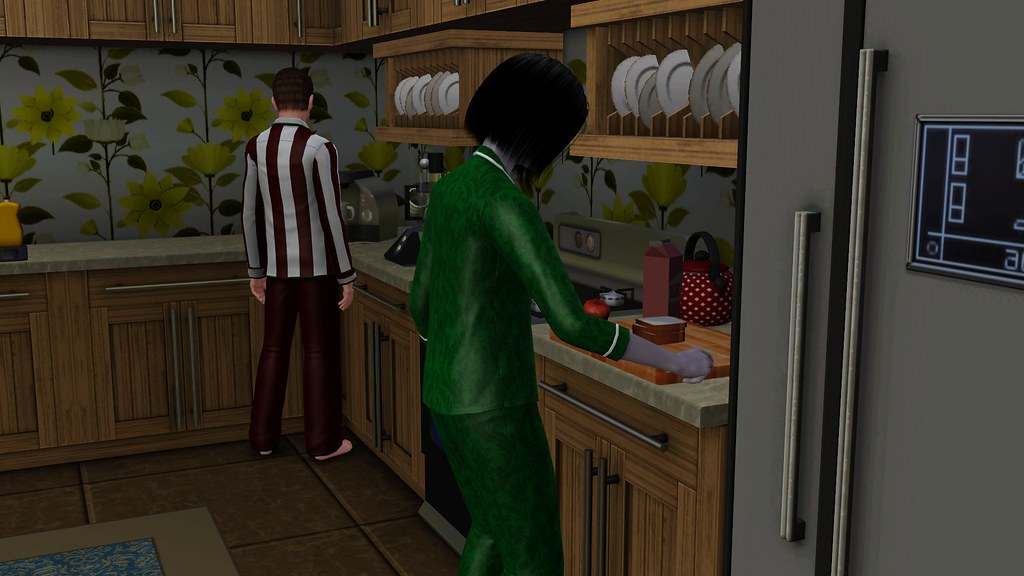 Mom was thrilled to be hosting another holiday party for her family.  Everyone was coming, it was going to be bigger than Thanksgiving.  Mom and Dad started cooking even before coffee and breakfast were ready. 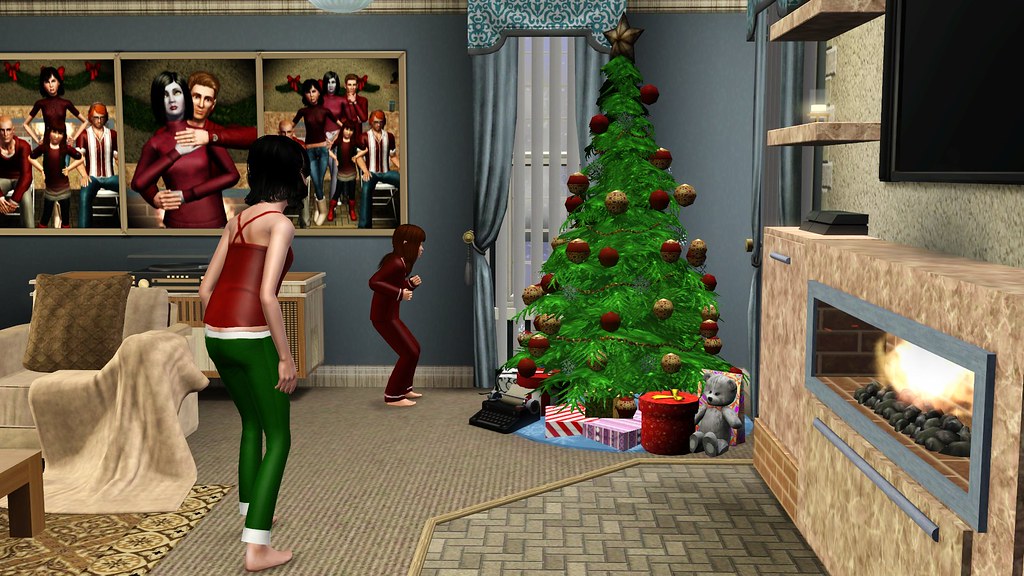 My job was to watch Annie so she wouldn’t open any presents.  She was gunning for a new dollhouse and could not be trusted alone with the gifts.

“None of these are house-shaped!  Mom and dad hate me and want me to be miserable!  I’m going to die dollhouse-less!”  She topped her dramatic sketch off with a pretty stellar faint. 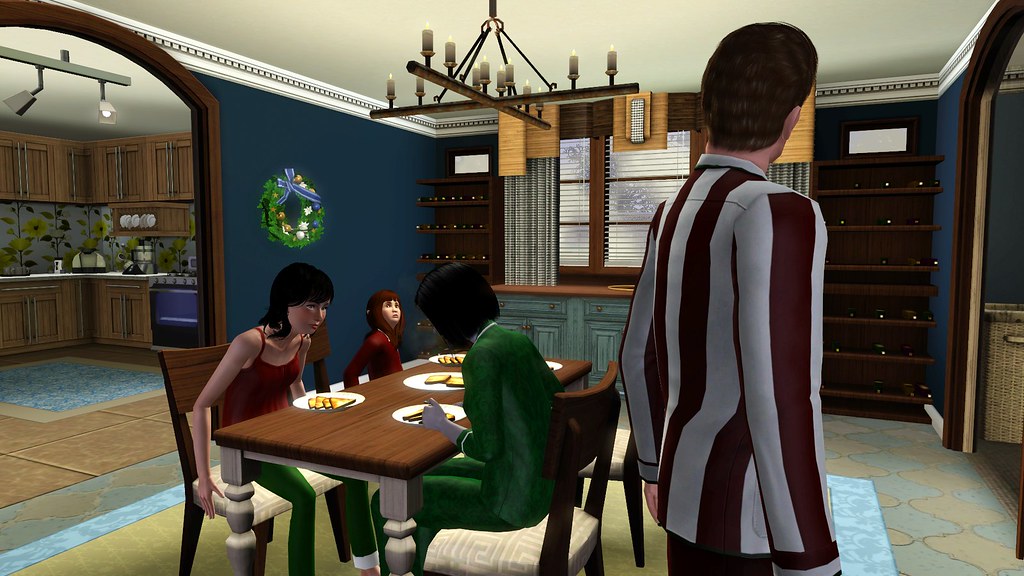 Finally we got to eat.  Mom made French toast.  I hate French toast but I wolfed it down anyway.  Annie continued her one-liner tirade against mom and dad.

“Wow, Daddy, you bought those hideous jammies but you didn’t buy me a lovely dollhouse?”

“Actually, your mother bought these pajamas for me with the money we saved for your dollhouse.  Because, you’re right, we totally hate you.”

“Yes, your father’s right.  Also, we think you smell like old gym socks,” Mom chimed while Dad gave Annie a kiss on the head.

“I knew it.  I’m despised.”  Another impressive faint was followed by many giggles. 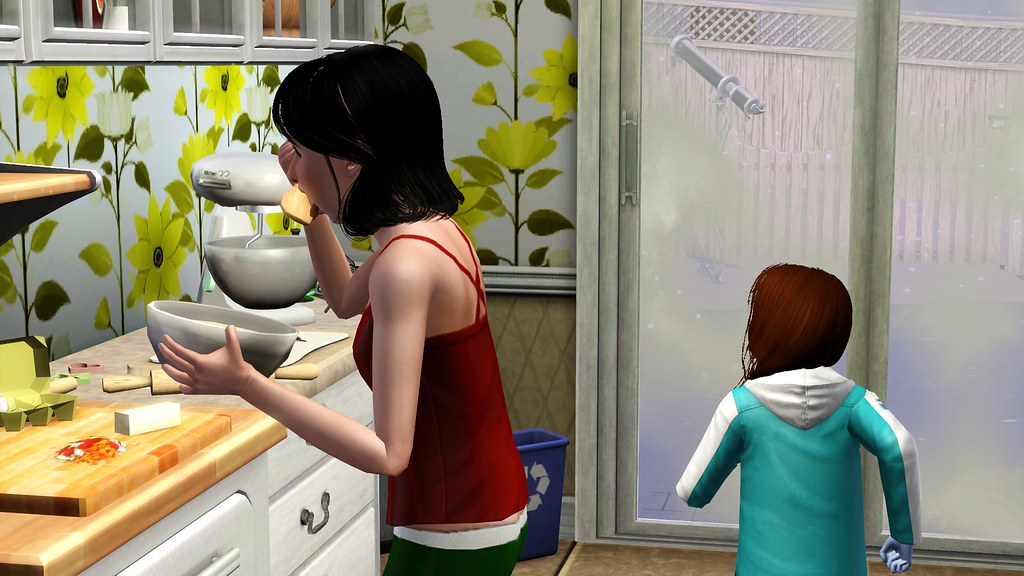 After breakfast, I was employed as baker.  Naturally, I chose to make a chocolate pie.

“EW!  Ellie cooties!  I’m going to tell everyone you licked the spoon and now there’s cooties in the pie!”  Annie didn’t have any work to do so she made it her job to run around and harass everyone else. 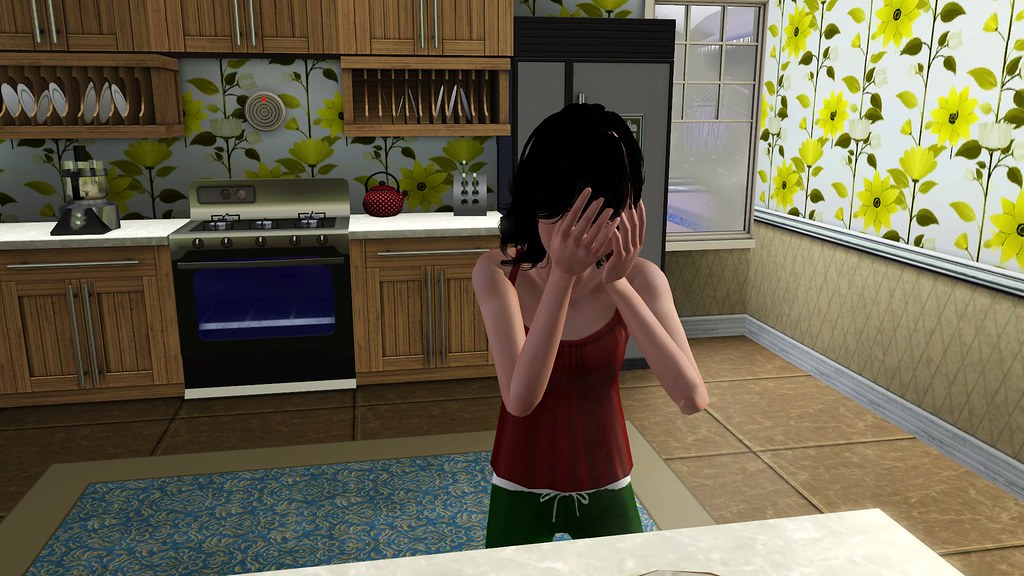 Despite the festive occasion, I was feeling unusually upset.  “Get it together, girl,” I told myself.  “You’ve still got a lot to do before you can talk to Aunt Liv tonight.” 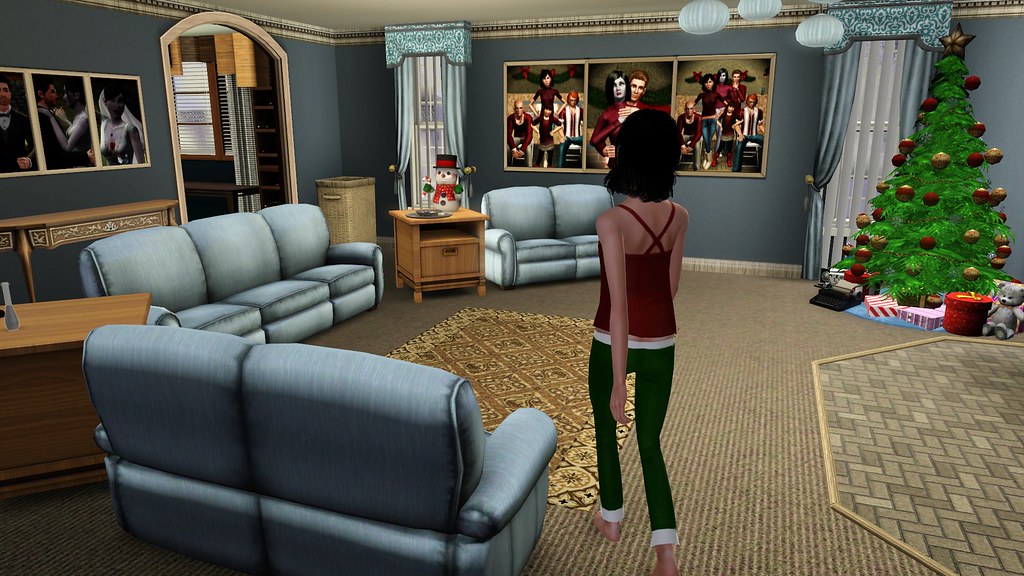 And I did still have a lot to do.  While Mom and Dad cooked and cleaned, I rearranged the living room so there would be room for the guests plus gifts.  This party better be good for all the work we had to do. 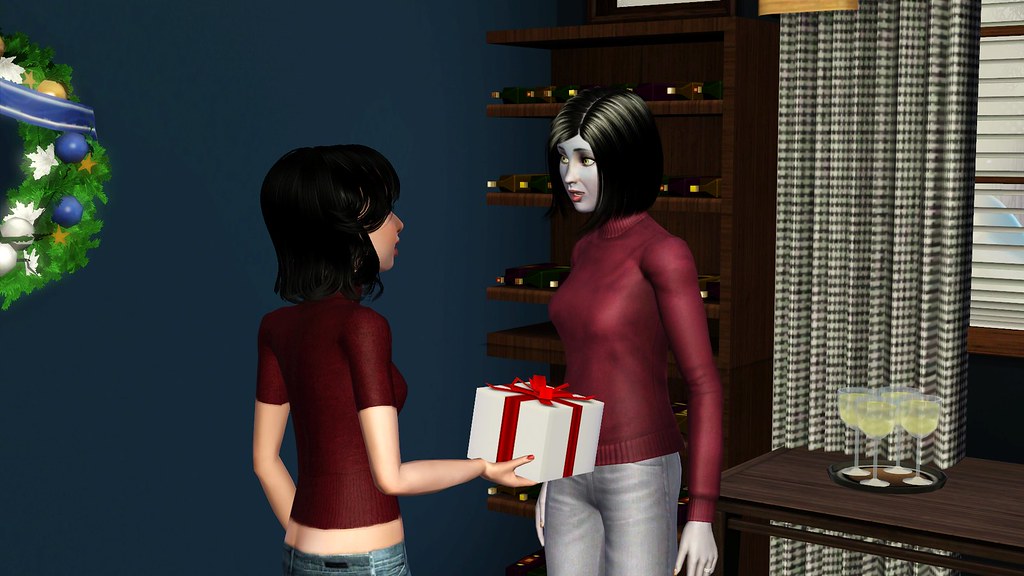 When I had done all the chores mom gave me and I had changed for the party, I decided to give mom and dad their Christmas gifts: some photos I took of them together. 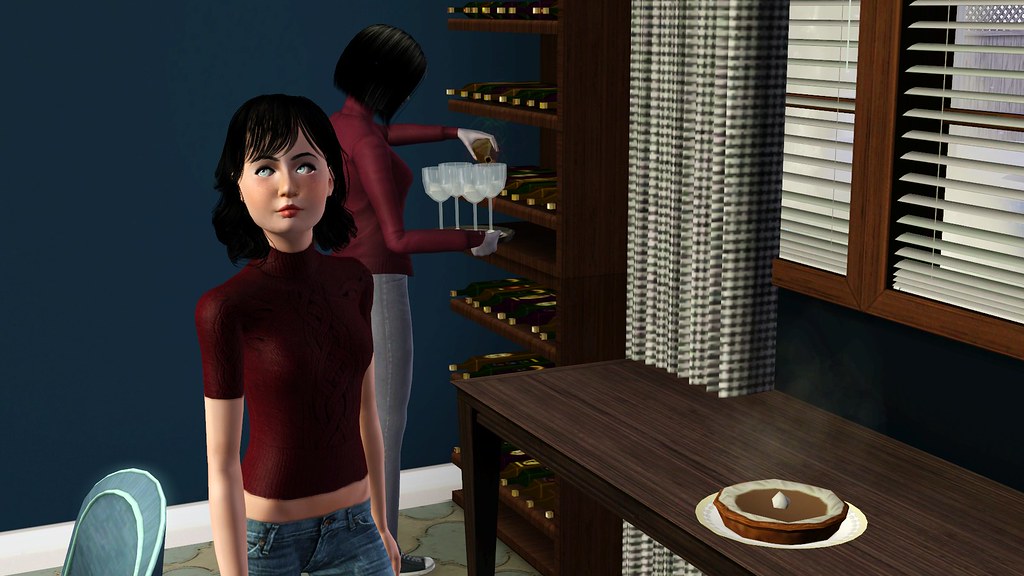 “And, Ellie, since it is Christmas, you can have some wine with dinner.” 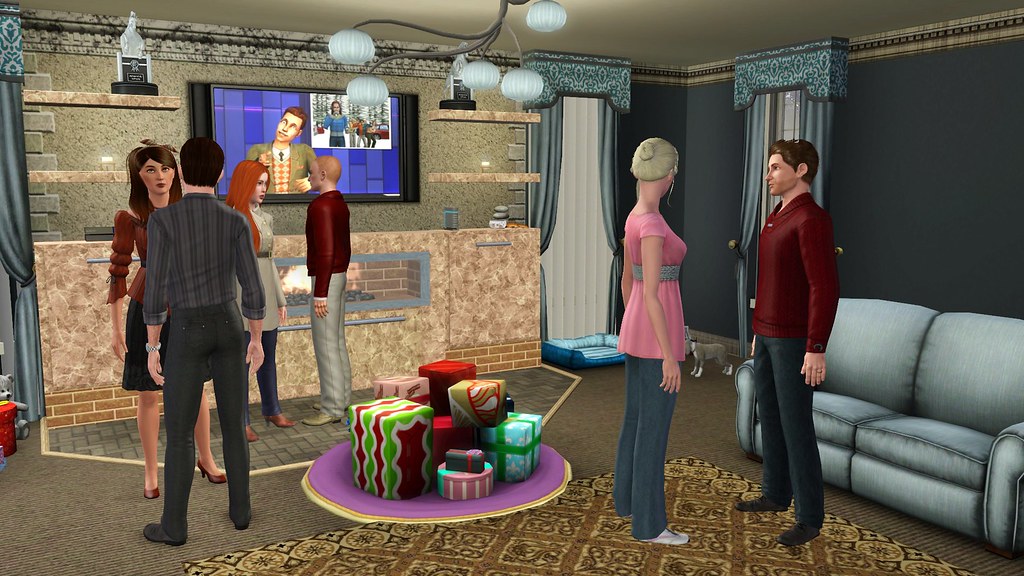 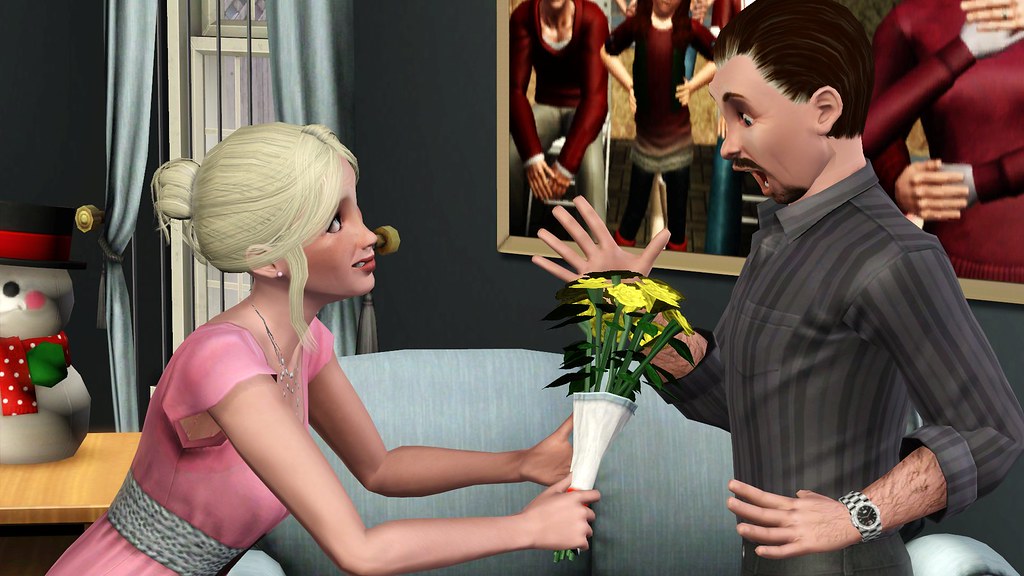 Aunt Liv and Uncle Mike are ridiculously cute.  I totally want to me them when I grow up.  That’s probably not gonna happen now though but it was really cute to watch them. 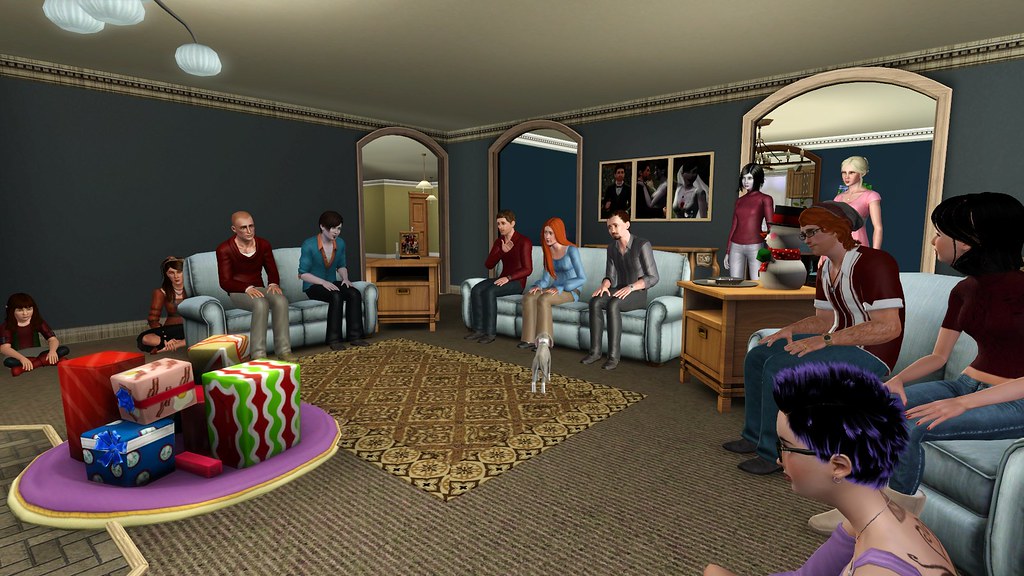 With so many guests, we all got some great loot. 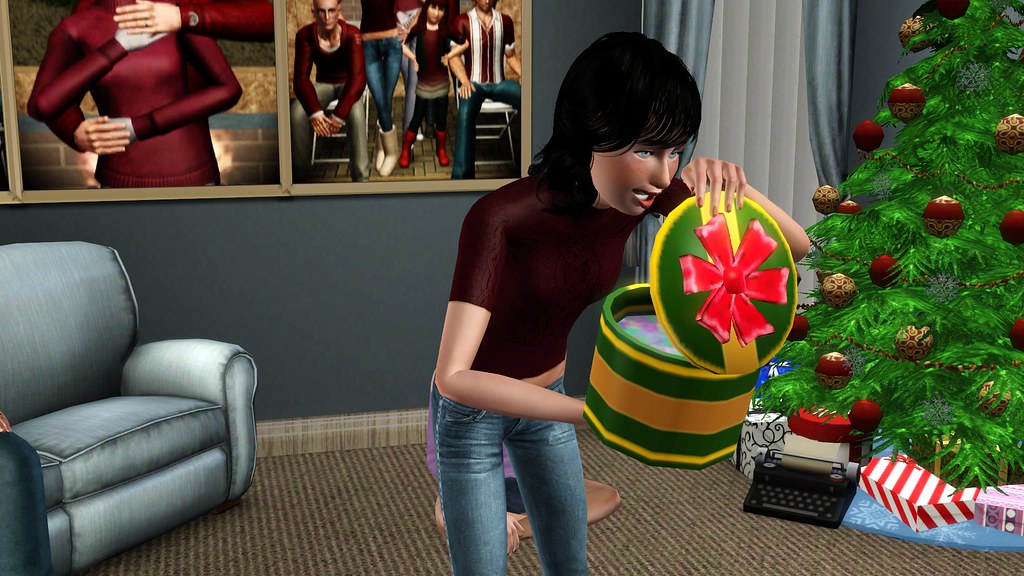 I walked away with a new guitar from Aunt Liv and a new easel from Uncle Adam.  Mom and Dad got me a new bedroom set. 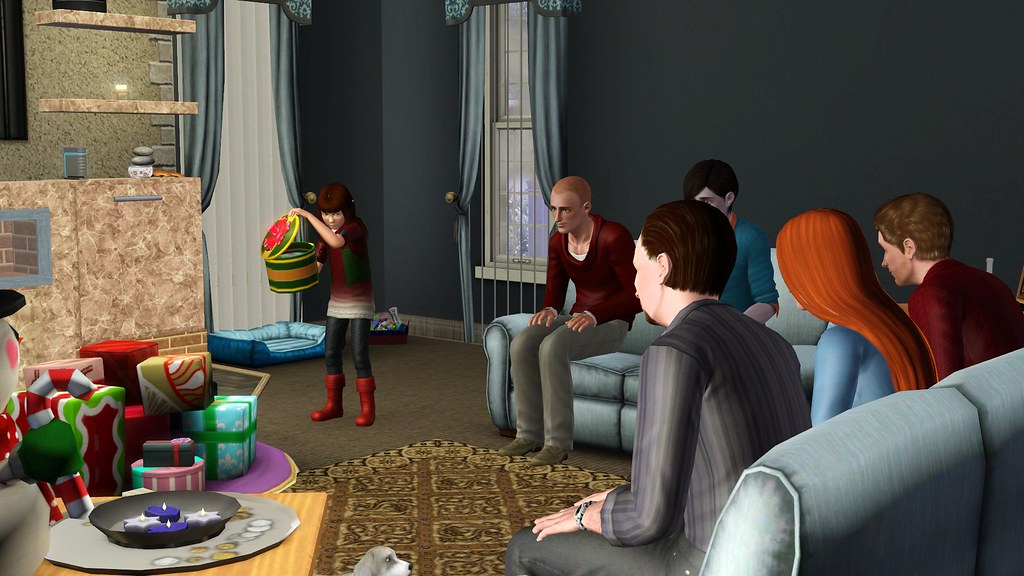 Poor Annie got a bunch of dolls… 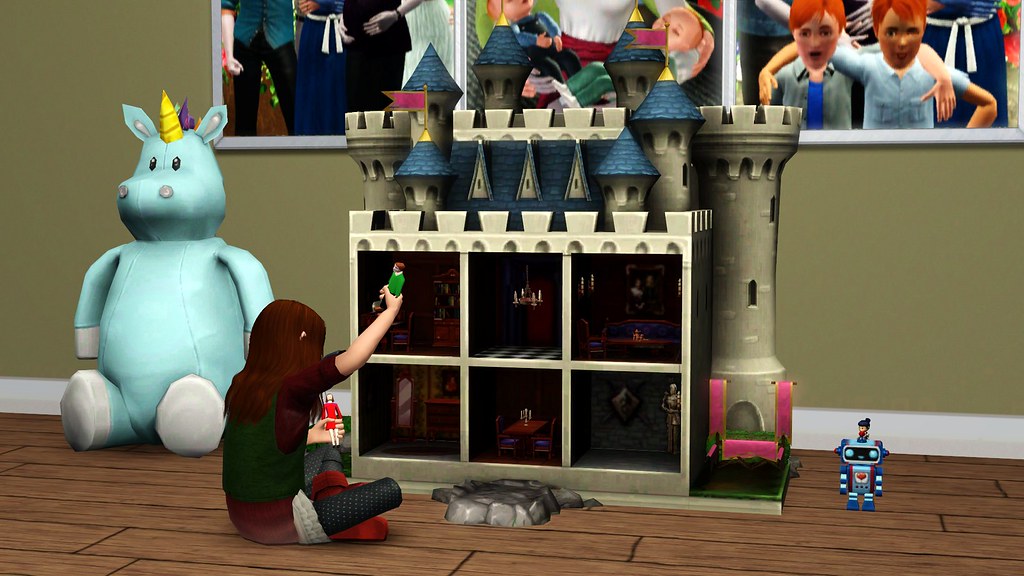 They paired nicely with the humongous dollhouse Mom and Dad got her.  I mean, the thing is bigger than she is!  They obviously hate her. 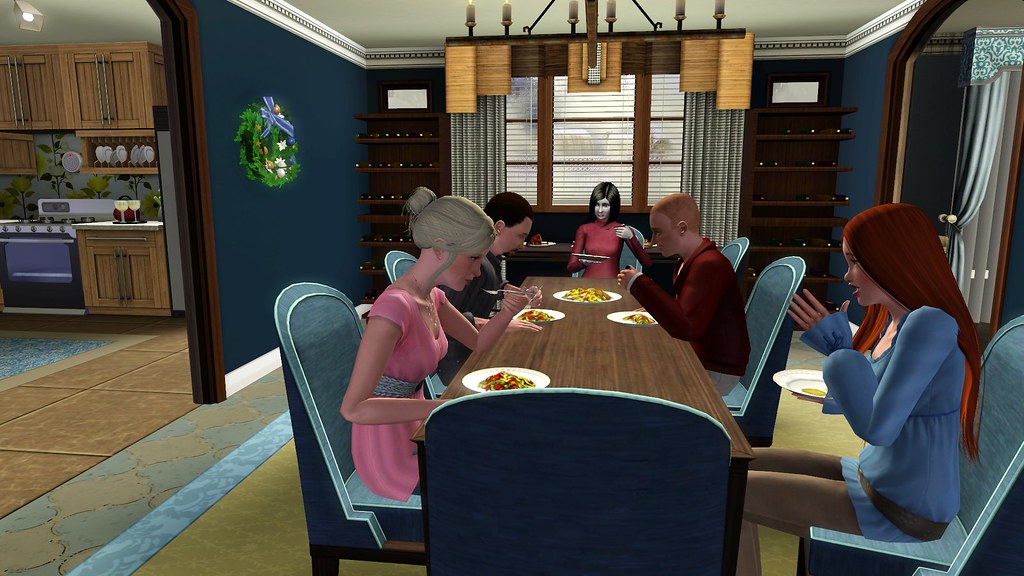 Of course my pie was everyone’s favorite dessert.  Honestly, I don’t really remember.  I was trying to devise a plot to get Aunt Liv alone to chat.

After dinner we had epic Playstation battles.  Uncle Adam was the only one who could beat Aunt Liv.  It royally pissed her off.

Unfortunately for me, Aunt Liv snuck out while I was trying to beat Owen at MarioKart.  I had to chase her down.  Thank goodness she only lives across the street. 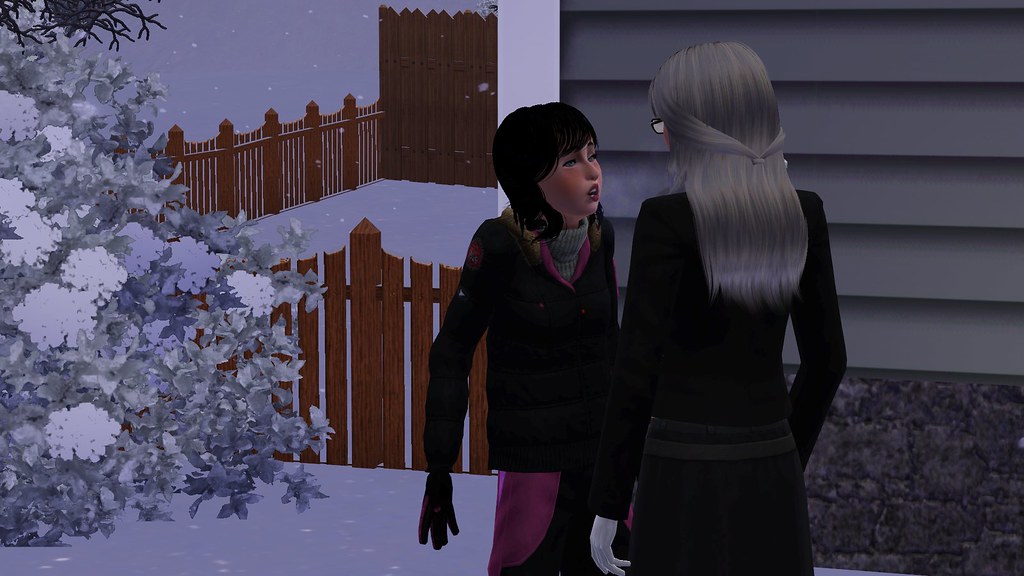 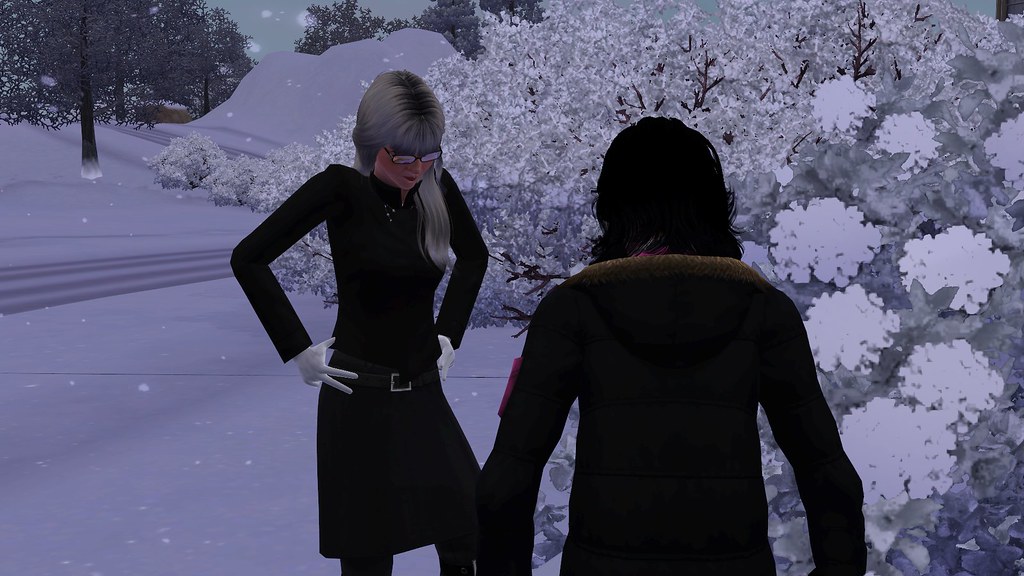 She paused.  I’d clearly caught her off guard.  “Ok, well, that’s going to require some cookies.  Let’s get inside, kiddo.  We’ve got to talk.” 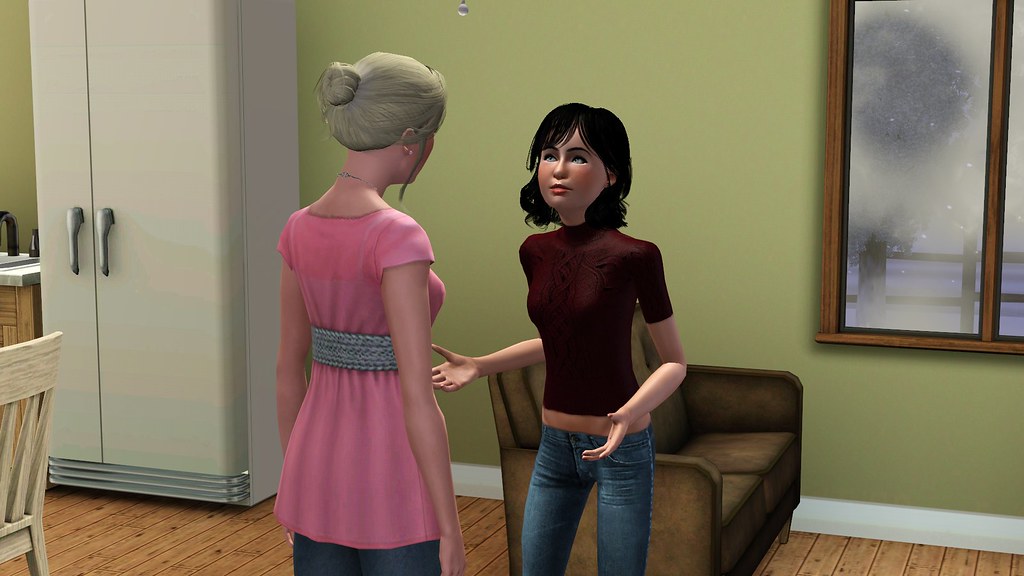 After eating a bunch of cookies (Aunt Liv totally knew about pregnancy) I launched into the story about Oscar and Homecoming and our awkward romance following that night.

“And I was stupid and I knew better but I still had sex without protection…like 8 times.”  I could not believe I had gotten myself into this mess.  Luckily, I had come up with a plan to get myself out of it, too.

There was a school in Hidden Springs called Ridge Hall.  It catered to the social and cultural elite (read: actors, politicians, and socialites) whose daughters ended up in the family way.  If I could transfer there, I could have the baby, give it up for adoption, and nobody but Aunt Liv would know. 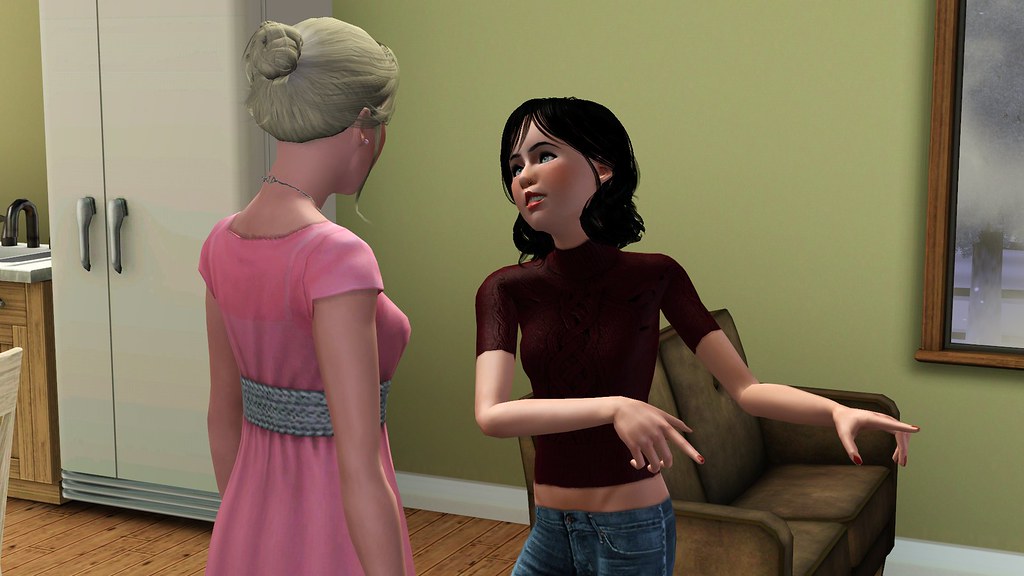 “So I’m a senior.  As far and I can tell, the baby would be due end of May or early June.  If I transfer to Ridge Hall in the spring, I’ll be able to come back for graduation and Mom and Dad won’t have to know,” I triumphantly explained.

“Child, do you really think that your mother would send you to a boarding school she knew nothing about?”

I had not thought of that.  “Tell her you know about it.  Lie for me, Aunt Liv!  She can’t know about this baby!  Please!”

“Relax, Danielle, relax.  Mike and I will foot the bill for Ridge Hall.  I’ll come up with something to tell your mother,” she paused long enough to wrap me in a huge hug.  “However, you will have to talk to her about this.  I’ll cover for you until you are ready but I will not keep this secret forever.”

Before the night was over we had enrolled me in Ridge Hall, found an OB/GYN in Hidden Springs, and tried to think of what I was going to do once all this was over. 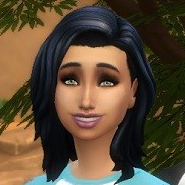 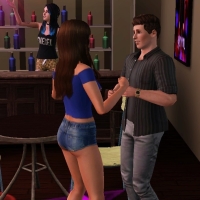 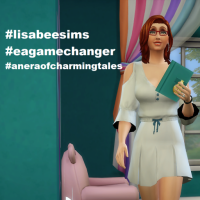